This morning I was in a bit of a funk, one that carried over from last week and I did a rambling post about it. Well, shortly after that last post, I decided I needed to get myself out of the house, do a little bit of shopping (in my running attire) for a few items that I need for running (which I didn’t find), get out into the sunshine amongst people, and finish off week two of the running program I’ve been half-heartedly doing. I also needed to test out my new toy/running mate.

I got myself a Garmin 305! I originally looked at the 405, but decided I couldn’t quite afford another two hundred dollars for it (I’m still paying doctor bills from having pneumonia in February). I’m so glad I bought it. I just programmed in the interval training for W2D3 (run 90 seconds/walk 2 minutes x 6) and off I went. Now I don’t have to listen to the training podcast on my MP3 player to cue me when to run and walk. I really don’t like wearing headphones, I like to hear what’s going on around me. I love the sounds of being outside, hearing people talking, the trees rustling with the breeze, and especially the birds chirping. Besides, I can’t hear people announce when they’re passing me on the trail and I literally jump when they suddenly appear in my peripheral view.

The Garmin was actually delivered last week on a day that I was feeling really tired and I did something stupid that night. I turned it on to check it out but I was just too tired to focus on it. I put it on the coffee table and went to bed. The next morning, as I was getting ready for work, I heard a funny beeping noise. I realized the source of the beeping was the Garmin. I forgot to turn it off and the battery was low. It has a battery life of 10 hours and had been on for nine! I’m much more careful with it now and keep it on the charger all the time.

Anyway, the run was great! It was around 70 degrees, very sunny with a slight breeze. Today I went to Lake Zorinsky since I was out that way shopping. The run was challenging because of the small inclines, but not too much. I just kept concentrating on my breathing and, on the last run interval, challenged myself just a little to run a little faster. Afterwards, I felt tired and was breathing hard, but didn’t feel the need to stop and catch my breath. 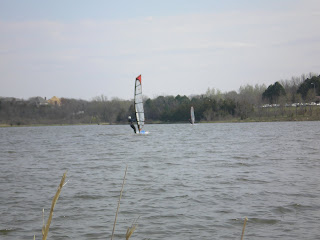 Windsurfers on the lake
After completing my run, I continued walking for a while and did some people watching. I saw a young couple walking what looked like a small grizzly bear (that’s exactly what the guy said when I asked what kind of dog it was). The young woman holding its leash said it was a Newfoundland. I found an old tree log along the lake shore where I sat and watched some guys windsurfing on the lake and other people running and biking on the trails. It was a very busy place. I felt great and was in a much better mood.

Yep, running can improve your mood and is a great stress reliever. I need to keep that in mind the next time I feel the blahs coming on.
Posted by Pat at 9:58 PM

Glad you're feeling better...good job getting out there! :)

Looks like a great place to run. l love running near water. And there is nothing like a Garmin!