The last time I posted I was working on running a total of 15 miles/week. It was very tiring for me, but I was doing it. Then I decided to add two nights of boot camp. My daughter (D2) is a personal trainer and has her own business so I joined her boot camp (for free!). I managed to keep up the 15 miles along with the two nights of working out - for two weeks. I also added a few days of hiking during that time frame.

For some reason, after each activity I was feeling exhausted and found it difficult to stay awake. I was crawling into bed by 8:00 p.m during the week and taking naps on the weekends. I would doze off while reading blogs, even while trying to post on my blog. It got so bad I couldn't even stay awake at work! I had very little stamina so I cut back the weekly running miles, kept the boot camp workouts and decreased the amount of hiking.

But, I'm still running and the boot camp has helped make my legs stronger. I ran a Memorial Day 5 mile race at Boys Town with my family, started as a volunteer trainer for the Step Into Running program that is run by my running group, ran in the Warrior Dash in Kansas City and on Labor Day will run the Go Girl Run 5k.

The Memorial Day race was 1 mile and 5 miles. My daughter (D2), her husband, 15 yo son, 12 yo daughter and 2 yo daughter ran the 1 mile. It was Momo's (the 2 yo) first race and she was excited! I was in charge of taking pictures of her so I had to jump into the race at the start, point behind me and shoot and hope the pictures came out. Then I had to run to other locations along the route and take pictures as they came by. At one point she looked up at her mom and said "I'm a runner like you mommy". She ran most of the mile and walked some but wouldn't let anyone carry her when they offered. She was a tired little girl afterwards. 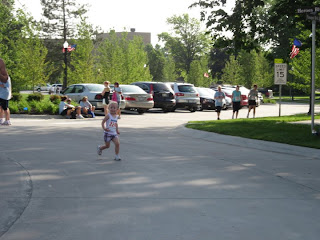 Momo coming around the round-about before the final stretch 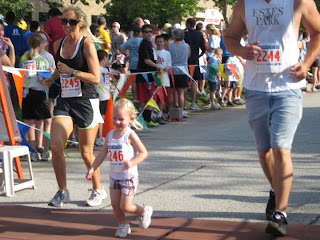 I ran the five mile run with my friend Fitz. It was very hilly, the temperature was around 90 and it was very windy! It blew me off course a few times. My time was 1:15:41. Yep, I'm still slow.

The Step Into Running program is the same one I went through last summer when I started running. It helped me so much! When I first started I thought I would never make it through the first week running 1/5 intervals for a total of 30 minutes. I distinctly remember the first time I ran for 15 minutes without stopping - I was so excited and told our trainer right then that I was going to be a volunteer trainer this year.

During one of my hikes with a local hiking group I told one of the women (R) I'd been hiking with a few years about how I went through the running program. She was very interested and signed up. Plus, she got seven of her co-workers to sign up! So they became my group to run with and I started referring them as my Running Peeps. R even created a Running Peeps Facebook page for us. Some of the women are a bit over weight but they got out there every week and even as a group before or after work several days a week. They all have the best attitude about life. They have all improved so much. I'm so proud of them! They even plan to run the Go Girl Run race with the group.

July 30th my family and I went to Kansas City for the Warrior Dash. We got there on Friday, the 29th and spent 7 hours at Oceans of fun, went back to our hotel to shower and went out to a nice dinner with several of my daughters friends/boot campers that she talked into running the WD with us. We got back to our hotel and around 10:30, as I went to get my running clothes out of my suitcase, I discovered that I didn't pack them or my running shoes! I remembered that just before putting them into my suit case, my oldest daughter called me. As I was talking to her I zipped it up and carried everything out to the sidewalk to be ready when D2 got there to pick me up. Luckily for me, D2 brought extra running clothes and I used my every day Reeboks (not even close to running shoes) to run in.

The Warrior Dash (WD) is an obstacle course 5k. This is word for word description from their website, "a mud-crawling, fire-leaping, extreme run from Hell. This fierce running series is held on the most challenging and rugged terrain across the globe. Warriors conquer extreme obstacles, push their limits and celebrate with kick-ass music, beer and warrior helmets". Let me just say - I was exhausted! It began running uphill, which really sucked for me. With my lungs, it's difficult to start off running up hill. I ran almost to the top before having to walk. I ran down all, or mostly all, of the hills and tried to run up the hills as much as possible. 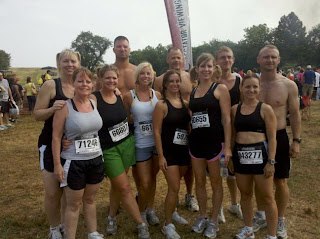 Us before the race
There were around 12 obstacles to climb over or under or both. Each obstacle was taller and more challenging than the previous one, with the exception of running through a large area of tires. That was the easiest one. We ran through fields, woods, on muddy and rocky trails, and crossed three streams (one fairly wide and up to my waist). After the third to last obstacle we had to run up another hill, turn and run through another small group of trees and immediately jump two fire pits then crawl through a very large mud pit that had barbed wire going across half of it.

As I got to the top of the last hill I could see the fire pits through the trees. I was so tired! I saw a guy fall when he jumped the first fire pit. Luckily, he fell in the area between the first and second fire. When I saw that I stopped and decided to take a minute to catch my breath before attempting the fire. I wanted to be sure I would make it over both fire pits without falling. They must have just stoked the fires because the flames were pretty high! And you could really feel the heat.

There was a short running distance from the fires to the mud pits. People were actually diving into the muddy water! I ran up to the edge of the mud pit, stopped and attempted to just step into it but fell on my keester right into the mess. It felt gross! The bottom had to be about three inches deep of mud then another two feet of water. I decided to use my hands to pull myself along and just let me legs float behind me. It gave me a little bit of a rest. Then I felt something and pulled it out of the water. It was a piece of clothing, probably a shirt. I just tossed it aside. My daughter said people were picking up shoes out of the mud and tossing them onto the bank.

After a while, the water got shallower and it was more mucky mud than water. That's when we came to the barbed wire running across. At that point you had to actually crawl on your hands and knees and try to miss the barbed wire. By the time I got to the end of the mud pit, I was so tired. I actually just dug my fingers into the mud and pulled myself out of the pit. I stood up and felt myself weaving back and forth. I was afraid I would fall backwards into the mud. Then I heard my granddaughter yell for me. When I saw my family I broke into a big smile, raised my arms into the air with my index fingers pointing up, indicating that I finally made it! And I was a muddy mess!

But, I still had to cross the finish line. I still had several yards to go but somehow I managed to muster enough strength to stagger across the finish. I actually heard it ding as it read my timing chip. At the finish they put a medal around my neck and I staggered over to the water tables for a much needed drink of clean, cool water. My time was 1:10:26. I came in seventh of 16 in my age group. Thankfully they had water trucks that hosed off some of the mud. The buses that shuttled us back got very muddy. 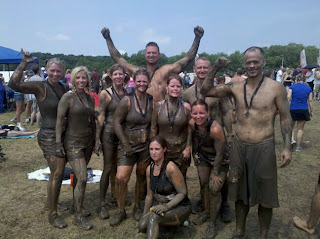 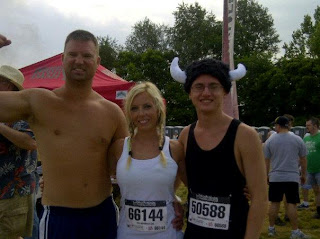 D2, Son-in-law and grandson before the race.
Grandson is wearing the horn hat we got.
Even though I was exhausted, muddy and thirsty I plan to run the Warrior Dash again next year.

Unfortunately, within a few days of getting home bronchitis hit me again. I think it was because I didn't get enough sleep and the race was so exhausting for me that my immune system got worn down. I'm now on my second round of antibiotics and just started prednisone today. It's still affecting my stamina. It's been a bit difficult running since the WD.

I sure hope the bronchitis clears up for the Go Girl Run on Labor Day - which is also my birthday!

*I just realized my WD time was faster then my Memorial Day 5 mile time! Awesome!
Posted by Pat at 7:41 PM

That little Momo is so darn cute!

Good job on the Warrior Dash.

Sorry to hear about the bronchitis and the prednisone. Do take care of yourself so you can enjoy the Go Girl Run race.
Little Momo is absolutely adorable!!
Congrats on the Warrior Dash...I find it so awesome that you did this. I also love your running peeps...you're doing great Pat!! :)