A Marathon, A Celebrity and A Race For The Cure

I should have titled this 'Running is great but it makes me very tired' because that's exactly what my problem is these days. I'm exhausted all the time now. But that's for another post because I'd better get to the topics of this post before I get too tired and save it as a draft, again.

Since I had never been anywhere near a marathon race before, I felt I wanted to experience it from the beginning so I volunteered to stuff the race packets, hand out the packets then help with food prep at the finish line. Of course, I signed up as a volunteer before the girls decided to run in it. But, I did enjoy participating in it on the other side. It made me appreciate the hard work that goes into organizing a marathon and I got to meet a lot of great people.

The morning of the marathon was quite chilly and the excitement about the whole event was awesome. I was with the girls and their friends as they found their way into the crowd at the starting line and watched as the massive line of runners slowley made their way under the banner and down the road. I continued watching as they made their way across the railroad tracks, under the interstate and  disappeared between the buidings going through downtown. I couldn't help but wish I was running with them.

After losing sight of most of the runners, I reported to my post at the food prep section right near the finish line. I cut oranges and bagels for about an hour while keepng my eye out for the first runner to come through. I knew that D1 would be the first of my girls to cross the line since she was running the 10k and I estimated how long it would take her based on her time running the Corporate Cup.

I finally decided it would be best for me to stop cutting up food before I cut off one of my fingers because I couldn't keep my eyes off the finish line. Since I had volunteer credentials, I was able to find a great place to stand just a few feet behind the line and see the runners come around the last turn into the finishing stretch and straight across the finish line.

After what seemed like eternity, but quite close to the time I expected, D1 came around the last turn, down the stretch and across the line where she received her medal from one of the Marine's. Since I'm not a photographer (D1 is) and all I had was her phone camera, I managed to get a great picture of her coming across the line ( I keep forgetting to have her send it to me).

I was able to get D1 into the area where I was and we saw the rest of the group come in that ran the 10k. D2's husband, mother-in-law and 2 yo daughter arrived but couldn't get into the same area, so I took his camera to get a picture of her as she ran across the finish line.

We had estimated when D2 would be coming through and we were quite surprised when she came in a little sooner. It was awesome seeing her and her friend N (one of her boot camp clients) run around the last turn and down the stretch side-by-side. They crossed the finish line toghether, holding hands. I got tears in my eyes watching them. They hugged when they stopped then got their medals. It was both girls first half-marathon! I was afraid I wouldn't get the picture because I was so nervous waiting for her, but the picture was awesome!

D2 is the blonde 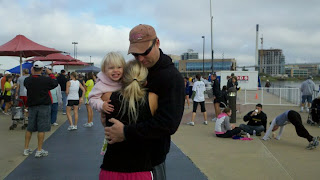 D2's husband and 2 yo daughter congratulating her

All of the girls did a great job. D1's time was 1 hr and 12 minutes. She took five minutes off her last 10k time two weeks prior! D2's time was 2 hours 9 minutes - awesome for her first half! Her friend N was 1 second behind her.

Now for the celebrity! Jeff Galloway was in town for the Marathon. The Omaha Running Club held a few events for him. I went to a reception at one of the art galleries and talked to him. I told him about running my first 10k, using the run/walk method he advocates, by running 5 min/ walk 1 min. He asked what my pace is and I told him around 13 (yeah, I'm slow). He suggested I do 3/1 to begin then going to 4/1 and finish at 5/1. That way I start out slow and don't get tired in the beginning and will have enough to finish faster. He also spoke at the pasta dinner the night before the race. It was pretty interesting meeting him. He's a nice guy, has some great stories about his running career and great advice.

October 3rd was the Susan G. Komen Race for the Cure 5k that I participated in with my girls and their friends. We had the option of purchasing a timing chip or not and we all got the chip. This race was huge! (I thought so anyway). There were around 20,000 people - runners and walkers. It was a see of pink (except for me, I wore red!)

The people with the chips were suppose to line up at the front. And we were just a few rows back from the starting line! I knew I was in trouble. I knew I would have to start out way faster than I wanted or should or I would get trampled.

I thought I was going to lose a lung before I was able to get far enough to the side to safely slow down. I was intending to run with D1 and W (she had the timer as I forgot Little Red) and I was way ahead of them. I had run well over five minutes before I was able to slow down and find them. Then W noticed that she hadn't started the timer! I suggested we walk for a minute then start the timer.

We did 4/1 intervals but I was already tired and was having some difficulty breathing. I had used my inhaler on the way to the race and noticed that it didn't have much in it so I didn't get the full amount of medication.

After a few about a mile and half I told D1 and W to go ahead because I just didn't have it in me. I was really struggling. I just kept doing the run/walk intervals even though I wasn't able to time it. What I did was count the seams in the concrete - I would run and count 20 or 30 seams (depending on how I was feeling) and walk for 10 or 12. I wanted to be sure I ran longer than I walked and that I only walked for very short periods.

Finally, when I was about two blocks from the last turn before the final stretch, as I began running I told myself I wasn't going to stop until I crossed the finish line. When I came around that corner I saw that it was a longer stretch than I had thought. I wasn't sure I would make it but I kept going. I tried to kick it at the end and managed to speed up just a little. All of the girls were waiting for me just beyond the line, standing in single file with their hands up and gave me a high-five as I came through. It was a great feeling!

Unfortunatlely, when I stopped running the coughing kicked in something fierce. I could barely breath or talk. I used my inhaler but it was completely empty. I had to just keep coughing and trying to keep myself calm and slow my breathing. At one point I had thought about going over to the medical tent and asking if they had an emergency inhaler but the coughing finally subsided and I did fine.

There was a pink ambulance parked not far from the finish line and some volunteers were handing markers to everyone to sign or write messages to people they know that survived or died from breast cancer. I found a place on the back corner and crouched down to write. When I was finished I turned around to find a camera man filming me. My daughters joked that I was a camera magnet. I didn't see if it made the news because I didn't catch which TV station he was from.

There was a lot of food and give aways. One of the local Medical affiliates gave away tulip bulbs in little pink satiny bags. They're pink tulips. We're suppose to plant them this fall, which I haven't yet so I better get them planted tomorrow!

This running and racing really is addicting! I can't wait to get off work to go run. But, for some reason I'm extremely tired all the time. In fact, I had a tough time pushing myself to run this week. I had a docor appointment on Monday and had some blood drawn for tests. I should find out the results next week. I think my hemoglobin is low again.

Anyway, that's what I've been up to and why I'm not blogging much. I can't stay awake and I'm dying to get to bed now! Good night and happy running!
Posted by Pat at 12:33 AM

How cool that you volunteered...I definitely want to do that one day. Congrats on your 5K...good job fighting to finish strong :)

Hope you are okay. How awesome to get advice from Jeff Galloway!

Well done on your 5km. Sounds like you are seriously hooked to me, especially when you wish you were out with the pack instead of volunteering. Now if you can do a 5km. with a 5/1 ratio I really believe you could do it with a half marathon. I think your time would not be much more than that of a slow jogger. When you go out for your play runs simply add 5 minutes every week. That's all i did until I gradually built up to the amount of time I gestimated it would take me to do the half.